By and large, I generally like most of the changes Google makes—both as a user of their search engine and also as somebody who takes an ethical, user-centric approach to SEO. That isn’t to say Google’s changes have been perfect. There are plenty to complain about and question. Historically, my favorite one to question was keyword “not provided” but recently I’ve been stumped on Google’s plan of going mobile first.

My objections and questions can be boiled down to one simple question: why?

Let me elaborate on that question a bit more.

Here is the share of traffic by device for visitors arriving from Google organic for a handful of clients and sites where we have access to analytics (and where we can confirm analytics is tracking properly) from October and November 2017. These sites are all over the place in terms of industry, audience, and traffic volume. I didn’t cherry pick these – I randomly selected 25 sites from our Google Analytics account. Granted, 25 isn’t a large sample size given the number of websites out there but I think this still points to some interesting trends that challenge this “mobile first” push… 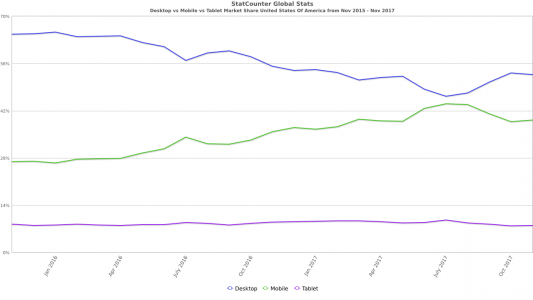 But that is mobile across the board—what about the share of traffic from organic visitors using a mobile device? Here are the numbers over 15, 16, and 17 (for the same sites as above where the tracking code was reliable that far back and where the site existed that far back). In general, the same trend holds true when you compare the growth. A larger share of the growth was present between 2015 and 2016 where there was a median growth of 20.42% (and an average growth of 58.44%). Between 2016 and 2017, the median difference was 10.84% (average 14.93%).

This is in no way to argue against paying attention to your mobile website experience. Mobile visitors can matter a great deal—and for some of the websites listed above, mobile matters as much as if not more than desktop ever will. But how much mobile matters will vary based upon your users. And that variance gets to why Google’s switch to mobile first is so perplexing. Some parts of the web are mobile first and should be treated as such. But many places are desktop first and in those cases mobile visitors might be a close or distant second. Forcing websites that don’t have a mobile-first visitor base to act as if they are mobile-first might put them in an odd spot where they have to invest in a mobile-site to do “what is best for Google” instead of investing in what might actually be best for their visitors.